With the garden and an extended weekend beach trip presenting distractions from my fiber passions, not much sewing has been done this month except for some progress on 4 table runners using the Fab Five wedge template.  Two are from one version in the Fab Five Table Snacks pattern.  One has been completed.

Except for the fact that the fabric was purchased before the produce in the garden became prolific and was fermenting on the kitchen counter, one might have concluded these pickled veggies were my inspiration for this month's project. 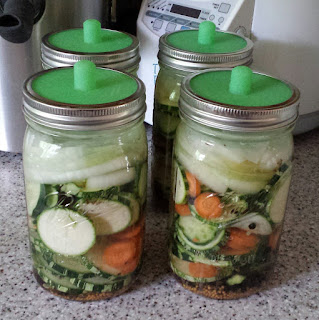 While I think I would prefer to have black strips framing each wedge with the 6 fat quarters I chose for the pair, I am satisfied with the appearance of the completed runner and would make up more using the same technique with or without framing strips.

Also, before I piece my wedges for my second pair of runners, I might reposition, omit, or exchange the bright lime batik.  It appears to have a phosphorescent glow and is a bit too bright amidst the others.

The runner is basically made like the reversible mitered napkins from the Alizida blog.  Since most of my table runners are layered with Pellon fleece, a very thin polyester batting, I thought I might not like just two layers of fabric for a runner but it is flat and smooth and looks attractive.  With the success of this runner, I might even try a Ten Minute Table Runner, a style I have avoided in the past, opting to make WOF versions instead.
Posted by Sally at 1:27 PM 2 comments:

This little guy was originally my Elm Street July OMG.  He had to be done before July 1st because a week ago my DiL announced our youngest grandson had a loose tooth and she didn't expect him to let the tooth stay in until the end of the week.  Her prediction proved wrong but the pillow was done for our grandson's weekly visit on Friday. 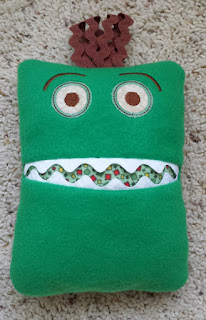 This fun little tooth monster pillow is a freebie from Embroidery Garden's FaceBook page.  Get details from their YouTube video as well:  What's IN THE HOOP with Embroidery Garden / Monster Tooth Fairy Pillow
Posted by Sally at 12:41 PM 1 comment:

We have busy times ahead.  I am not sure what will be a reasonable July OMG but I can try and see what progress I make with the table runners I promised my DiLs.  It is my intention to make a set of runners that they can use for holidays and year round.  One has most of the year covered except for general winter and fall season runners.  The other only has an all-seasons runner, Valentine's Day, and Halloween.
Since I missed getting a patriotic runner done for tomorrow, piecing a fall table runner is my goal.  Since a rather recent acquisition is a tumbler template that will work for tall and short tumblers, there are several runners I would like to try:

Tall Tumbler Runner
And another: