Did I say I was gauge challenged?  If not, the secret is out now.  Achieving gauge with a swatch and duplicating it in a project is a skill that eludes me.  A swatch may match the recommended stitch count but matching it in the project is rare.  If I easily achieve stitches per inch, the row count is next to impossible.  My only hope is that the row count is not a required element.

Zuzu's Petals is an easy and fast knit if everything works out right.  I met the stitch count per inch with size 9 circs but somewhere before joining in the round for the neck opening, I realized my big head just wasn't going fit because the opening was dependent on row gauge.  I made a change to smaller needles because the finer yarn version has more row repeats and the worsted weight yarn I was working with was finer than most.  Switching needles worked so I went with the pattern repeats for more petals.

Eventually, it became apparent that I might not have enough yarn.  The last pattern rounds I dared to knit were numbers 31 and 32, followed by a round to form points on the petals, and then a round of purling to control curling before I fiddled with binding off.  Ending my project was an easy solution to my diminishing yarn until I saw an error in the center back in round 32.  I figured the beauty of my yarn deserved perfection.

Un-knitting was tedious but only 4 rounds.  Perfection was not to be had.  After 3 attempts trying to achieve a loose bind-off and finally succeeding with a single crochet version, I found a dropped stitch in the lace around a petal.  At 1 a.m. one doesn't have any reserves or patience for back-knitting so I declared the project done and went to bed.  The slightly larger lace hole and missing stitch doesn't show but I know.  SIGH!!

The cowl was blocked this morning.  Pinned to a pressing mat, sprayed with a mixture of water and Shaklee's liquid fabric softener, and then blasted with the heat of a hand-held hair dryer; the edges have just a faint ripple that goes nicely with the texture of the lace pattern knit too tightly, something I found attractive.  The cowl is warm and soft with a beautiful painted pattern.  It will dress up a number of turtlenecks in my wardrobe. 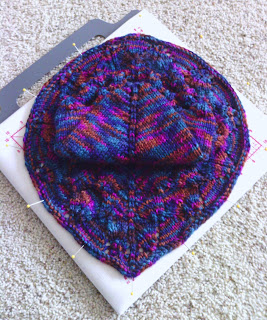