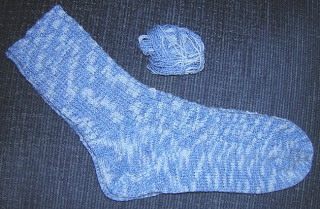 I actually finished these socks in time for show and tell on August 21.  My SIL and I had fun sharing our sock knitting progress.  I love her soft wool socks made from Knit Picks' Stroll yarn.  And guess what I just discovered at Knit Picks?  Yarn suitable for dying!  Yes, I am itching to try dying my own sock yarn.  I'll be stocking up on Kool Aid and Wilton's food coloring gels.  Keep you all posted on the results.
Posted by Sally at 2:49 PM No comments: 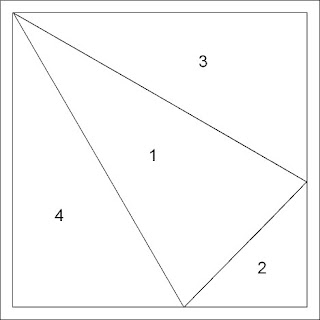 I just saw the Connecticut Yankee block.  I like the positive negative effect and the possibilities for a scrap quilt.  While the block can be pieced traditionally with templates, I thought you might like a foundation paper pieced version.  Click on the block to get the bmp sized for a 6.5 inch block, then right click and save.  Using 4, you will have a 12.5 inch block.  Or use the 4.5 inch block below for a 8.5 inch block. 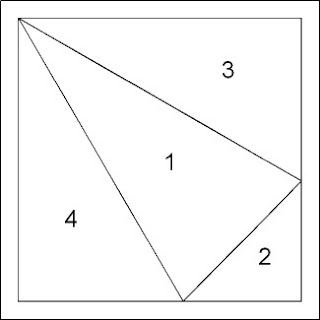 Never too Much Fabric, Right?

I say I am not going to buy more fabric, but I have done it again.  A bag, not huge but not small, has been collecting since the first of May when we on vacation.  I can't stay away from the stuff but I have enough!

Even if this video won't cure the addiction, it will bring a smile:

Labels: Too Much Fabric

Last week I had to stop knitting for a few days due to tendonitis in my right wrist.  SIGH!!  Of course I was able to get some much needed work done but still I missed making progress on the new socks on my needles.  What to do???

I let my wrist take a break and then I started in with some exercises.  I had a few stretches that I was familiar with but ultimately, strengthening the muscles is beneficial.  Here are a few links to get your started with improving the strength and flexibility in your hands and the supporting muscles:


Hand and Wrist Exercises
And a Few More
Posted by Sally at 3:29 PM No comments: 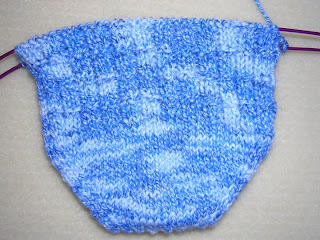 The intended zigzag rib that I mentioned in my previous entry, was far too complicated.  The pattern had a repeat of 20 rounds!  And I thought the wiggly bubble texture was a challenge!

I don't need any more mind benders with the reasons for 4-H judging classes needing my attention. The waffle rib is easy and brainless.  The version I came up with that works for this weight yarn is for multiples of 3; knit 2, purl 1 for four rounds, then purl the 5th round.  Repeat the 5 rounds.  The stretch is enough to work through the leg portion of the sock.  I need the give if I make my socks the standard 7 inches.
Posted by Sally at 10:46 PM No comments: 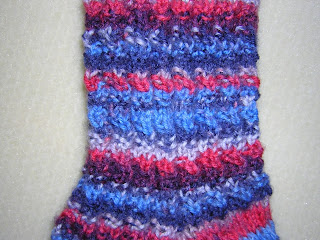 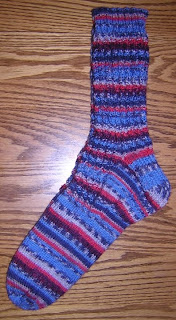 The textured design is actually a mistake.  I found a spiral rib that looked fun but it was written for straight needles.  When I wrote it for circs, I made a few errors and ended up with a wiggly bubbly effect that is very stretchy.  I liked it so much, I didn't tear it out and rewrite.  The only down side was trying to duplicate the pattern when I dropped stitches.  It was a real effort for my brain to think backwards through the pattern to pick the stitches up with a small crotchet hook.

The next pair of socks will have a zigzag rib up the top of the foot and around the leg.  It is a cool pattern written for circs in Socks a la carte.  I can't wait to get my copy of the new version written for toe up socks, Socks a la carte 2.
Posted by Sally at 9:13 AM 1 comment: