A Name for the White Rotary

The White Rotary has a name: Lorelei! She has already demonstrated her ability to call out and draw other treadles to her shore. I know the machine isn't made in Germany but I think she has a sturdy beauty like the rock she has been named after and she has a song she is singing to attract other machines like the fair maiden of the legends.

Yesterday, I remembered I had seen an ad for a treadle on craigslist in the city where I am headed to celebrate Christmas. I looked it up and there in living color was another White treadle in an oak cabinet. The price was $25! I emailed and asked the seller if I would be able to see the treadle the day after Christmas. He said, "Yes!" I can't believe it. The ad just expired tonight and I can't even link to it.

Lorelei's condition is much improved. I can now remove the needle and change presser feet. Also, the knob that adjusts the presser foot pressure is working. I have cleaned more green-brown lacquered oil off the machine. I think she will do more than sing. I found a nearly local source for reasonably priced treadle belts. Three are on their way. I should have them by the time I am back home from celebrating with family.

The New Member of the Fleet

Yesterday, I made another trip to see a treadle. This one was in a better place for viewing. We didn't have to stand in the rain to lift up a plastic cover. ;) A bit of history; I saw this treadle go up on craigslist on Tuesday. I asked for contact info and called the guy. I asked about some things that Katie Farmer recommended. She is the White guru on the Treadle On list. I was assured despite the missing oak plug next to the slide plate, that the cabinet was refinished and the machine would sew. The present owner had bought it from someone who was intending to sew on it.

When I saw the machine, the present owner said he had bought it as an intended gift for a relative but discovered she really wanted a Singer treadle. He found one and decided to sell the White. He said that the White had come up from CA with the previous owners. When he called, he got the husband and found out he knew nothing about the machine being for sale. Seems his wife had posted the ad without telling him. I guess he was a little irritated because he was working on the machine in hopes of sewing with it.

Now for some pictures. I have the machine on my workbench so you are just going to see the head. I will take more of the cabinet and irons later. 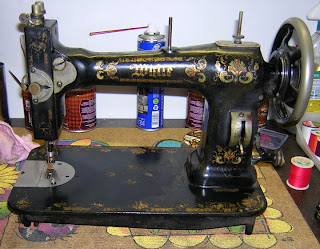 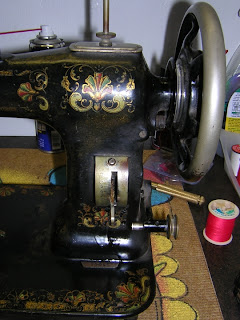 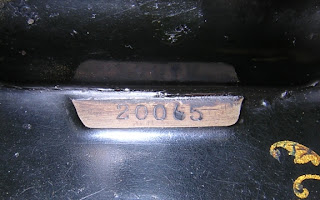 Okay, I know, this machine head is not going to win a beauty contest, but, hey, I can't afford anything in this area that might. Well, the truth is, I haven't been able to find much in the way of treadles in this part of the state. And besides, the handwheel and the working parts turn so easily. The handwheel just spins when I give it a good pull. I am really hopeful I can sew with this working wonder. The guy I bought it from wanted to sell it to someone that wanted it for its ability to sew. I think I was that someone. Now, I just have to get the tension right and do some more cleaning.

Back to the work bench. I haven't been able to get the presser foot off and there is a stubborn screw in the throat plate that is resisting me. Oh, I have to think of a name for this machine, too. 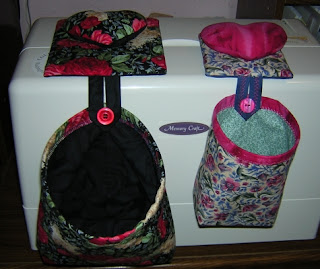 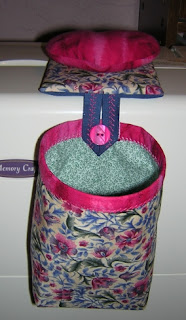 This project makes a nice gift for a sewing friend. You can find the instructions for the project if you join the following Yahoo list: http://groups.yahoo.com/group/SGOTs_SewingBeeSite/files/

The project instructions are in: Thread Catcher Sewing Bee

Here are my notes on the changes I made:


Jane's Thread Catcher
Can use 2 fat quarters but a third accent color can be used for a band around top of bag.

One tab to attach scrap bag with a button: 3" by 6" sewn in seam of cover for tile (fold strip into quarters with right sides out, topstitch and make a pointed tab, may zigzag stitch part of tab together to form a smaller opening for the button.)

For heart pincushion, trace heart shape on one of two fabrics. Make a buttonhole in heart that will be on the bottom (interface for more stability). Cut open. Sew around heart shapes with a 1.5 stitch length. Trim seam allowance with pinking shears. Stuff firmly. Whip stitch buttonhole closed. Hot glue or Velcro on covered tile. I have been told the new heat fusible Velcro is very good.

Here is a tip: If you can't slide the padded tile in the fabric cover easily, cut a piece of plastic wrap or shopping bag just big enough to go around the covered tile and then slide it in. Pull the plastic out after you have the tile in the cover.

Another from a friend: Use fusible vinyl to line inside of bag. Your threads and scraps will fall to the bottom more easily. 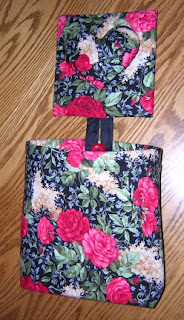 What Kind of Flower are You?

Okay, so I am not much into gardening but I took this quiz and I am a daffodil. The flower is me! So what are you?