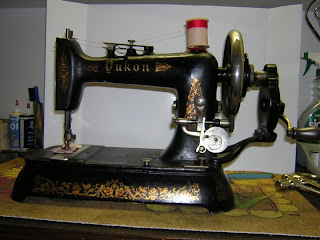 Dora, the Yukon handcrank, joined the fleet on Saturday, March 22nd. This little Yukon had been listed on craigslist several times. I finally decided to try for it despite the fact that the front slide plate was severely bent and stuck open. We met Judy, the owner, at REI in Seattle to check the machine out. The little machine appeared to be in very good condition with no rust. I decided it would be a good purchase and brought her home. All of my consultants say this machine has the look of a badged Davis. I checked out some photos of Davis handcranks and I concur.

Dora had been a gift to Judy, so the name which means "gift" seemed appropriate. Also, being a Yukon and purchased at REI plus being so cute and dark, who wouldn't also think of the cartoon character, "Dora, the Explorer".

Dora has a shuttle that looks new and 2 bobbins. The bobbin winder is very cool!! She also makes a beautiful stitch. I guess she needs to make some blocks for TOGA, too!
Posted by Sally at 11:30 AM No comments:

Well, the verdict is in! I just finished doing a set of TOBE blocks for the Treadle On Birthday Bash. Minnie did her share with the 1/4" foot I purchased at JoAnn's (find the foot with the White sewing machine attachments). The results is just perfect! I would highly recommend the foot if you own a machine with a standard low shank ankle. If you can't find the version on a hinged ankle, you will need to get the snap on type to accommodate the foot. I already had a few of those around from the Kennies and Janomes I own. 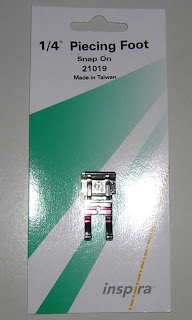 Sewing on the Road

Awhile back, I posted a link to a young fellow who takes a treadle out into the streets to repair clothing for folks. He operates in LA or San Francisco. Here is a site showing an African who is an itinerant tailor repairing a zipper with a hand-crank sewing machine on the back of a bicycle: