Wendy and I are happy to announce the completion of her first quilt.
Wendy tried her hand at binding after I finished quilting simple meandering loops I call bubbles.  The quilt is ready for the baby shower in June. 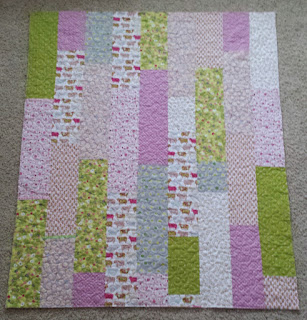 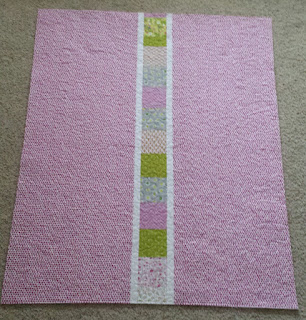 This top was started in 2010.  The Rail Fence variation was made from 2 sets of 6 different fat quarters, one set given to me by a dear friend who gave them to me for my time spent helping her pin a quilt for that would be a gift for her first grandchild.
The quilt was on Patience, the HandiQuilter, when we were packing to move.  Unfinished, with only borders needing quilting, it was rolled up, bundled in a pillowcase, and tucked away.  I resolved this week to get it out of storage and complete the borders, and then ready it for binding.

My goal has been achieved with little else to applaud.  The computer guided patterns were a poor choice because they only accentuate borders that have only the appearance of being straight at brief glimpse or great distance.  No one will be permitted near the quilt carrying anything that looks like a yardstick, tape measure, or T-square.
Posted by Sally at 10:27 AM 2 comments:

This sweet quilt top is the first effort of a new friend.  Wendy has asked me to help her finish her quilt.  I have made a back for the quilt and my Elm Street Quilts May OMG is to quilt this top for her so she can bind it and give as a gift at a baby shower in June.  This is not the first baby quilt I have collaborated on but it will be the first quilt quilted on the longarm quilting machine that has replaced Patience, my Handi Quilter 16. 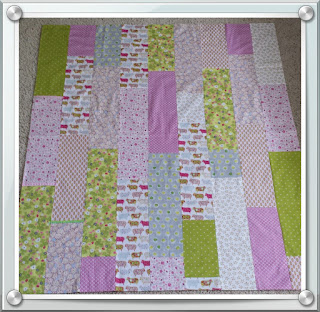 Second try on the photo didn't improve the view.  I guess my phone just isn't seeing the delightful collection of fabrics like I do.  :(
Posted by Sally at 10:44 PM 1 comment: