Can this be knitting?

Netted ribbon yarn is not my fiber of choice but I accepted the challenge of a friend and now a scarf of layered ruffles is falling from my needles.  The work is tedious with each loop having to be spread open to hook it with the knitting needle to become the next stitch.  Don't drop a stitch, picking them up is a challenge if not impossible.  I started over, once, already.  See if I do another one!

My Amish Jewels version of the Painted Diamonds Bag is ready to felt/full.  I-cord handles have been twisted and tied with a square knot.  Should I leave them twisted or undo them and twist them after the bag has been processed?  I am leaning towards leaving them twisted through the water bath.  Any thoughts or recommendations from experience?

Update:  Today, August 28th, was felting/fulling day.  The bag was processed with the handles twisted.  They didn't stick to the bag and they can be separated to be twisted again.  Some thought they might untwist with the vigorous agitation.  They may but they are just as likely to twist more.

Also, some recommended securing the handles with additional stitches.  I did this and I tied them before twisting.

I was blessed with a Singer Puzzle Box a week or so ago but something sticky had adhered to the surface.  From a telltale hair and previous experience with a Singer 128 from a barn with similar spots inside the base, I suspected mouse droppings.  To remove the rather large splotches in the 128 base, I soaked them with oil and scraped with a putty knife.  To cover the oily spots, I put in a nice new piece of black felt.  That process wasn't going to work for a nice looking Puzzle Box with a decent finish.
Since I had used oil on the Singer 128 base, I thought maybe something oily might work but it had to have more solvent action than just oil.  Since the Treadle On members are adept at cleaning old treadles stored in unusual places, I asked for suggestions.  Murphy's Oil Soap, Paul's Elixir (a specialty home brew that seems to work similarly to Dr. Woodwell's)*, and OxiClean.  I put Paul's Elixir as a last resort because it will soften the finish on the wood and redistribute it.  If the droppings were embedded in the finish, I would need to use it to blend in the spots where the finish lifted.

I didn't have any Murphy's Oil Soap and I was afraid the oxygen peroxide created by mixing the OxiClean in hot water would cause discolorations.  So, looking through my own multitude of cleaning products for an oil base cleaner that would act like the wood oil soap, I turned up two, Ultra Krud Kutter and De-Solv-It.  I tested both but the organic De-Solv-It was more effective at softening the spots.  Even so, I still had to lift them with a flat blade screw driver and then smooth the area with fine steel wool.  They came off, but they took some of the finish with them.  Eventually, I will have to use Paul's Elixir to restore the finish but since the biggest spot is on the section that is usually sitting on the bottom when the emblem is upward, the box is now nice enough to display in my office near the Singer treadle cabinet. 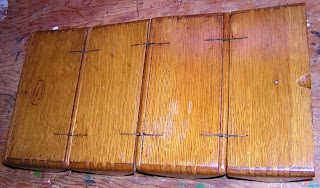 *Note:  Paul Hayes (the Fenman) has an extensive article at Needlebar.org.  Chapter 4 of the article specifically demonstrates The Elixir while to rest of the article is worthwhile for understanding the pros and cons restoration.
Posted by Sally at 11:51 AM 1 comment: 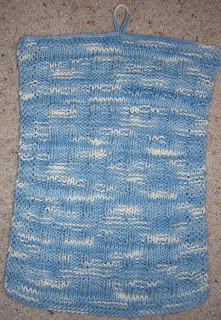 With a head cold and tons of laundry to do, I tried to take it easy between loads.  This little towel sort of fell off my needles.  Later, with the laundry done, I sat in the sun to appreciate our recent appearance of summer sunshine and finish off the towel.   Now, that is what I call a productive but relaxing day!

I wanted something reversible that would work as a gift for the kitchen or bathroom with coordinating dishcloths or facecloths.  After a false start with another smaller towel freebie, this pattern developed.  It seems to have enough texture to be absorbent and is approximately the size of a guest towel (fingertip towel).